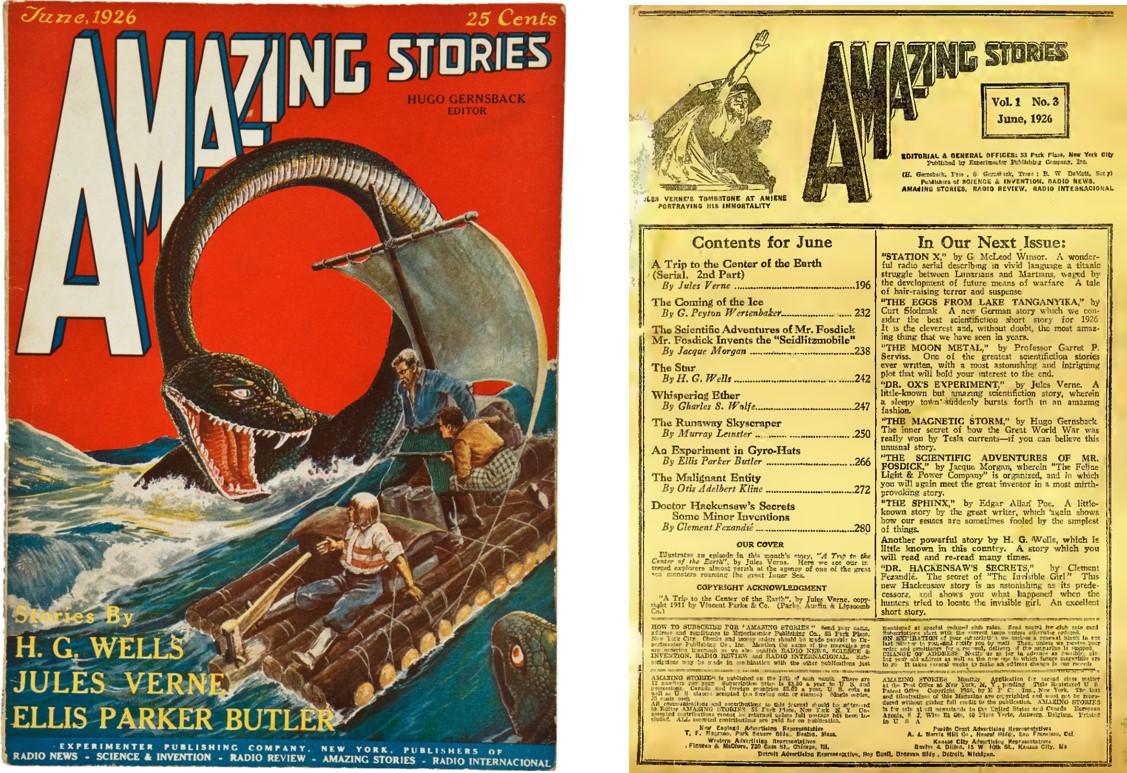 The June 1926 issue of Amazing Stories was only the third ever issue of Hugo Gernsback's new SF magazine, and he was at this time reprinting many SF stories by notable authors, as he got the magazine off the ground. In travelling back to a magazine from 1926, we go back a full 95 years - quite a bit of time travel to undertake as a reader.

This particular issue is of some interest as it includes Murray Leinster 's first ever SF story: The Runaway Skyscraper.  This was a reprint from Argosy & Railroad Man's Magazine first published 7 years previously on 22nd February, 1919. It also included what may just be the greatest title to a SF story of all time: An Experiment in Gyro-Hats, by a famous writer of the time, Ellis Parker Butler.

The Runaway Skyscraper - Murray Leinster
This is a great concept, and its a cracker of a story - a SF classic I guess. Some sort of localised tectonic or volcanic activity under a skyscraper in New York sends it back in time several thousand years. The Manhattan Island the skyscraper ends up in is a lush wilderness populated by indigenous native Americans.  A couple of thousand office workers make the trip back in time, and have to survive and somehow find their way back to their own time. There are several things about this I found very interesting. In 1919, when this was first published, skyscrapers were a new and exciting feature of Manhattan, and they were going up rapidly at the time. This presumably inspired Leinster to write about a skyscraper in his time-travel story. 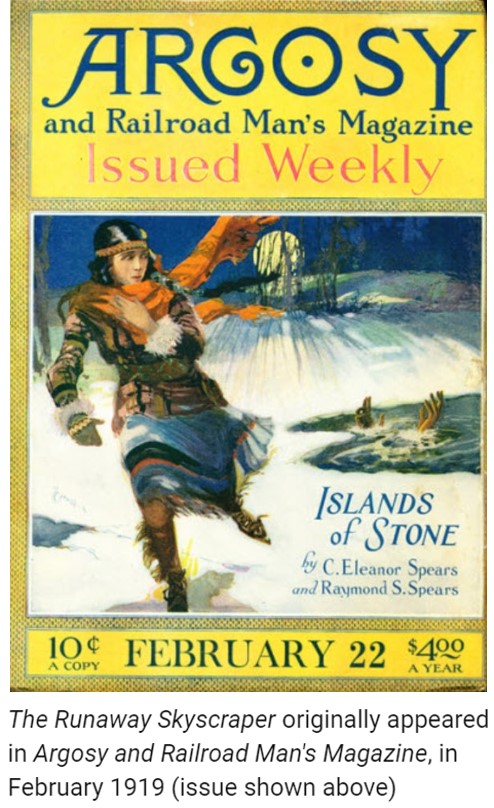 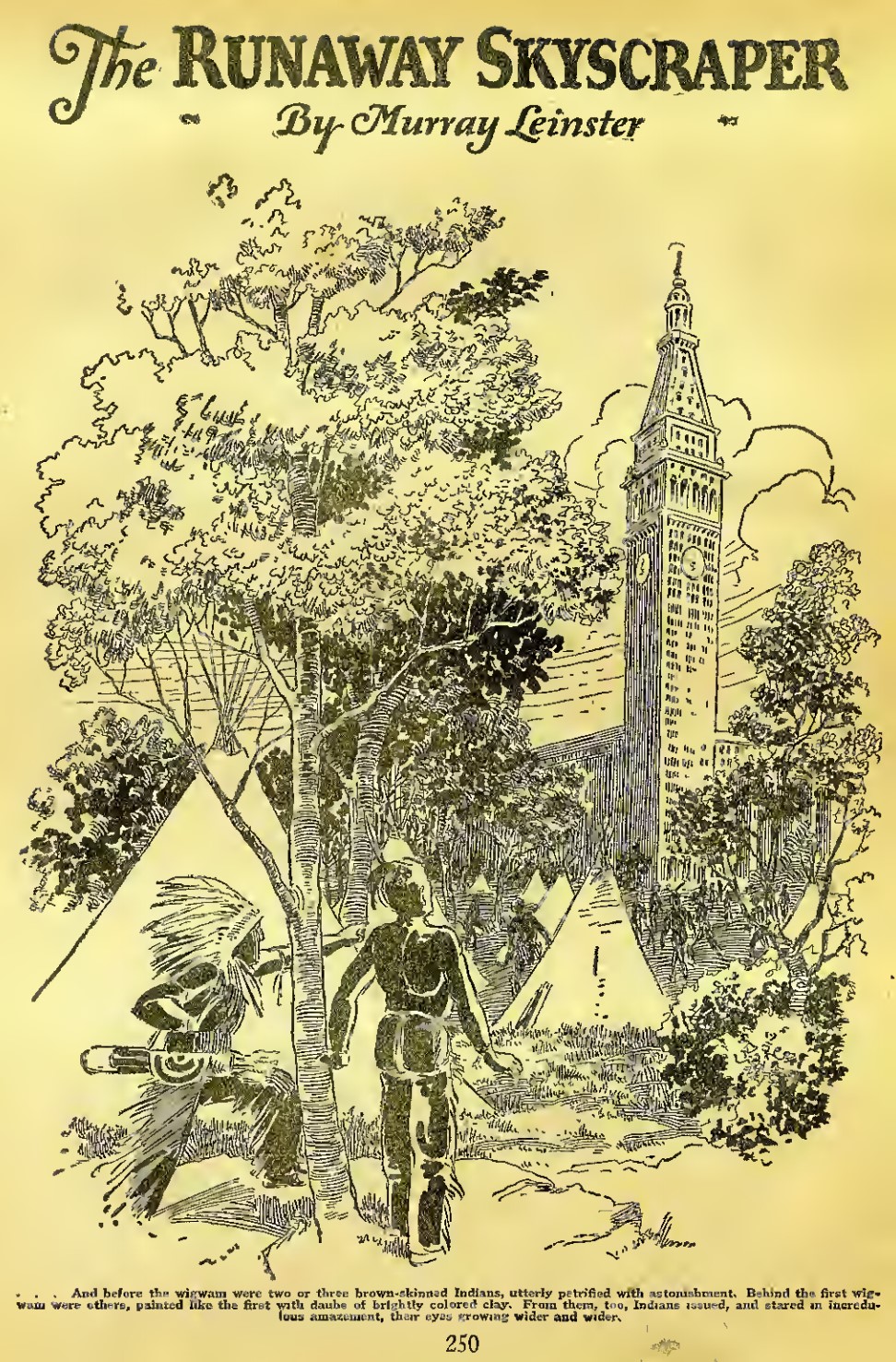 The cause of the time-travel was intriguing. Leinster had obviously got hold of the idea that time was a 4th dimension, and so when it was affected by an earthquake or similar event, it was shifted, not up, down, left or right, but back. Simple as that! The science in such an old story is always going to be dated and off-kilter but if you accept the premise, the scientific incongruences didn't compound further, and it was internally consistent. Something else noteworthy perhaps is that Leinster didn't make his characters at all concerned about cause and effect of their time travel. They trade with the local 'indians' - giving them materials and technologies far in advance of their own development. In a sense it was an enjoyable change for a time-travel story not to worry about the 'grandfather' or 'butterfly' effect of changing the past.

Leinster was only 23 when he wrote this story, having worked in the Committee for Public Information in 1917-18 as his contribution to the US war effort. Once World War I ended, he returned to writing, and this was his first published SF story. Leinster is perhaps unique in being a SF writer who connects the time of very early (pre-Gernsback) SF, and the much later 'golden age' of Campbell and beyond. No other famous writer I can readily think of wrote within so many era's in SF's development.

An Experiment in Gyro-Hats - Ellis Parker Butler
Butler was a famous writer in his time (notably for the short story Pigs is Pigs), and published fiction alongside such writers as Mark Twain and F. Scott Fitzgerald. I was attracted to this story for fairly obvious reasons, especially when you see the illustration for the story, shown here. This must be one of the most amusing ideas in early SF - gyro-hats, what's not to like!

The prose here matches the impression you would get from the illustration - it's very humorous and reads like a cross between Twain and Wodehouse. The daughter of a well-to-do 'hatter' has become betrothed to a man she realises too late is a 'staggerer' and is in a blue funk as a result. Her father, a manufacturer and seller of high-class hats has long held the view that the upper part of a 'topper' was wasted space and oft wondered how it could be filled in a beneficial manner. He hits upon the idea of installing a gyroscope in the hat to counter the 'staggerers' stagger. A lovely feature of this story is the engineering consideration that goes into the hats. Vacuum-suction to keep them on! Much fun and shenanigans ensue.

An Experiment in Gyro-Hats is an unqualified delight, very funny, beautifully-written, quite literary in a Wodehousian kind of way, and an unexpected find in Amazing Stories. Indeed, its the closest in style to Wodehouse I've read than wasn't actually Plum himself. The story was first published by Butler in 1912, so this was another reprint by Gernsback. The original story publication in 1912 carried some lovely illustrations that are not in the Amazing Stories publication (see two examples below).


If you wish to read these stories, or others in this old magazine, you can access them, as I did, from this archive. 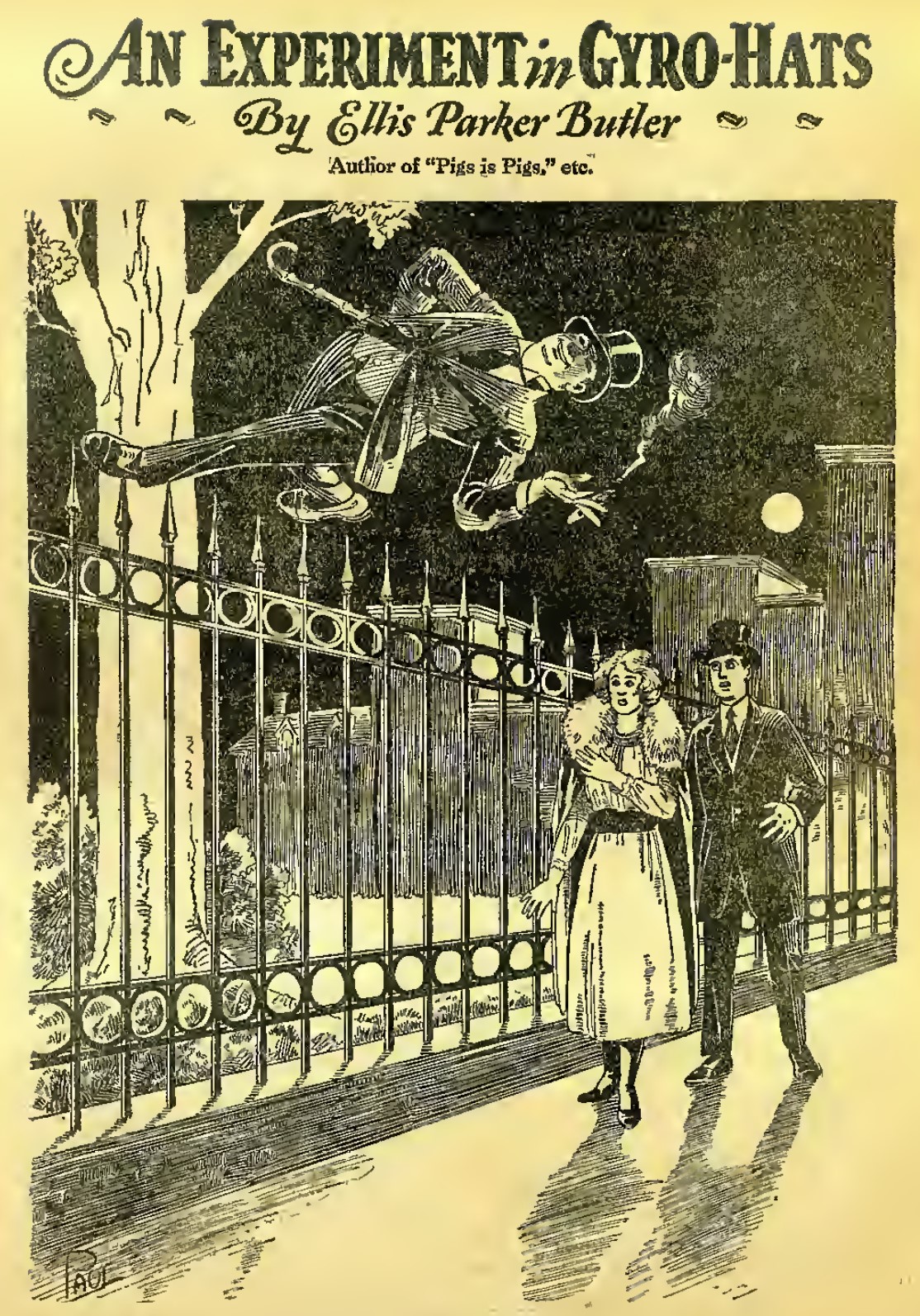