Thrilling Wonder Stories ran from mid-1936 until the start of 1955, with 5-6 issues per year for most of that run. Thrilling was started by Beacon publications after it bought out the original Wonder Stories from Hugo Gernsback in 1936. It was then run as more of a 'juvenile' title until Sam Merwin took over editorship in 1945, who did his best to make it more adult and contemporary. This issue from the end of 1946 contains stories from a stellar cast of famous authors, including an early Jack Vance and other stories from Kuttner, Leinster, de Camp and Pratt. 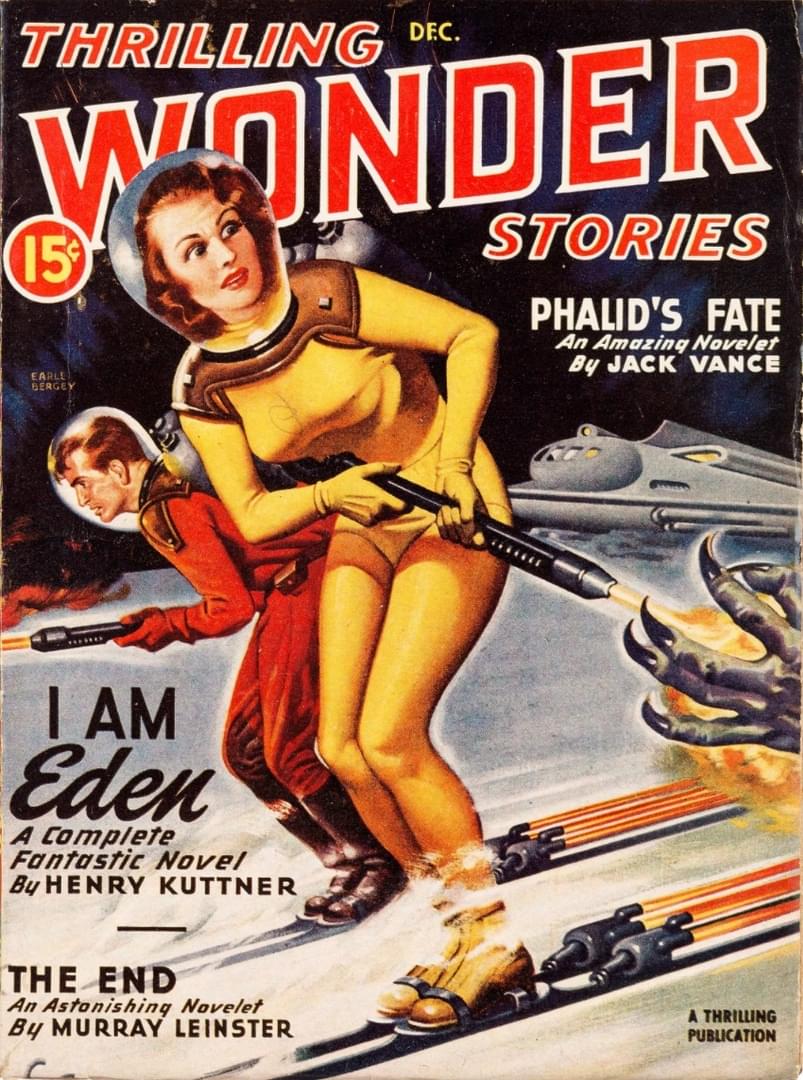 I am Eden - Henry Kuttner
Kuttner started publishing stories in large numbers from 1936 and continued doing so until about 1955. More than half his writing was in collaboration with his wife C. L. Moore, though this novella was by Kuttner alone. This is best described as pseudo-science fantasy. A small band of treasure-seeking adventurers trek deep into the Brazilian rainforest in search of a rich lode of radium. Arriving at the epicenter of their search, they find a land in which the animals, plant life and even the land and rocks are joined into a cohesive living thing. Strange animal-plant-stone 'things' abound. The scientific basis of all this is non-existent of course, and it's all very daft. But on a more positive note, it's written with the pulpy exuberance of the early sword-and-sorcery type adventure tales, and also with a degree of professionalism by Kuttner, that make it not only bearable, but strangely enjoyable. It's not great, indeed in some ways it is awful, and yet it's not without merit as a fun read, very much of its time.

The End - Murray Leinster
Another giant of the pulp era, Leinster (1896-1975) started publishing SF in 1919 (The Runaway Skyscraper, published in The Argosy and reviewed here ) and continued until shortly before his death. It's perhaps a result of his generation (born in the 19th century), but the ingrained sexism in this story is hard to pass over. I'm usually pretty tolerant of outdated cultural mores, but others of the time wrote of women and included key female characters, so it wasn't impossible.  In this novelette, Leinster takes us to the end of days on Earth, now a frozen and abandoned planet with a dying red sun. Researchers have gone back to try to find a way to stop a galactic collapse that will signal the end of the universe in less than five years. The destructive force moves much faster than light, apparently. And pirates come and attack them, so they need to find a way to leave the universe sharpish. Scientifically its very silly of course, and while this was also the case with the Kuttner, that story was presented as a boys'-own kind of fantasy adventure and got away with it. This didn't work so well for me. I'm not so sure Leinster is one of my favourite golden age authors.

Grim Rendezvous - Arthur Leo Zagat
Zagat (1896-1949) was prolific and wrote a lot of SF stories, mostly sold to the pulps in the 1930's and '40's. I'm not too familiar with his work, but he was successful enough to give up work as a lawyer to write full time in the last two decades of his life. This short story was a good deal more successful than the Leinster for me. A young physics researcher identifies something heading on a collision course for Earth by radar, but which cannot be seen by telescopes. What can it be, and should he tell anyone? This was nicely done, being entertaining, and quite a neat idea. The girlfriend of the protagonist also had some agency and spirit, which was nice to see.

The Ghosts of Melvin Pye - L. Sprague de Camp
A major and prolific figure in SF and fantasy, of course, de Camp won the SFWA Grand Master Award in 1979 and the World Fantasy Award for Life Achievement in 1984. This short story was a well-written and entertaining hoot. It's a fantasy ghost story; a penny-pinching landlord has ghosts scaring off his tenants and so he hires various people to try and get rid of them. The conversations, scenarios and final solution are comedic and entertaining. Recommended if you can find it, as a fine example of an amusing ghost story.

Phalid's Fate - Jack Vance
This was only the third story of Vance's to be published. Immediately the quality of Vance's writing is apparent - smooth, uncluttered, and yet evocative. This was by some margin the best story in this issue of Thrilling Wonder Stories, and seemed more modern than the other longer works by Kuttner and Leinster. Wratch, a dying soldier in Earth's war with the alien Phalid, has his brain transplanted into a captured Phalid, so he can go undercover to determine the location of the home-world of the warring aliens. Exciting and intriguing, Vance paints a rounded picture of the aliens through Wratch's new compound eyes, describing their advantages and perspective. The only negative to this story would be that it was a touch short. It's actually a novelette of decent size, but its starts more like a novel and ends up a little rushed perhaps. The idea would suit a novel well. 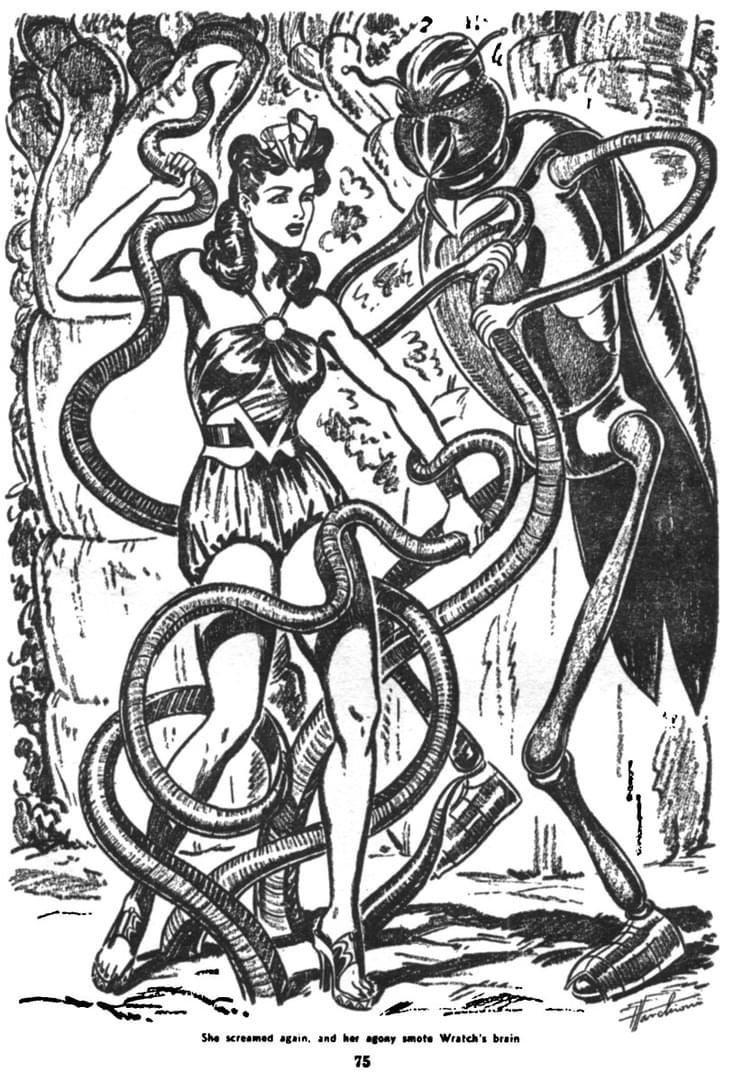 Pardon My Mistake - Fletcher Pratt
Pratt was well-published in the pulp years and perhaps was most famous for his collaborative stories written with de Camp, and for his fantasy novel The Well of the Unicorn. This was a very short story about a man looking to get revenge on his ex-wife and her new husband, but he makes an unfortunate mistake.  Filler, really.

Life on the Moon - Alexander Samalman
Samalman published only 6 stories between '38 and '51, though he became editor of Standard Magazines in 1954 (including Startling Stories and Thrilling Wonder Stories). Unfortunately the title didn't survive more than a couple more issues under Samalman's editorship and he died in Jan '56.  This is another very short tale, which reads more like an Edwardian tale such as Wells or Verne might have penned as a joke. It has a twist at the end and is quite readable, but otherwise has little recommend it.

Overall Thoughts
An interesting exploration. Reading whole issues of magazines this old really brings to life the state of SF of the time, the prevailing cultural mores, and tells us a lot about what was considered good and what was not. It's also interesting to compare with Astounding of this time. Astounding was of higher quality in general I'm sure, with more science in the SF and fewer daft and implausible scenarios. Thrilling was still trying to offer 'boys'-own' style space adventure, in a pulpy-Howardesque manner, and this style is starting to creak a bit, judging by this issue. The first two stories are not the best here, though the Kuttner is better than the Leinster, despite their prominence on the cover. Vance offers the best novelette by some margin - a newer writer in 1946, with a newer, fresher style. The de Camp was also fun, and the Zagat was really quite good.